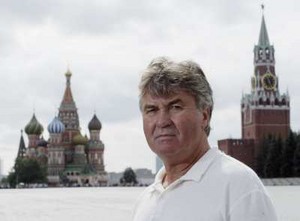 Chelsea Football Club is delighted to confirm Guus Hiddink will become temporary coach until the end of the season.
He is due to meet the players later this week.

The club would like to take this opportunity to thank the Russian Football Union for their understanding and cooperation.
The 62-year-old has been with the Russian national team since 2006, guiding them to the semi-finals of Euro 2008, a competition they qualified for at the expense of England.

During that qualifying campaign, Russia beat an English side in Moscow that included Frank Lampard, Shaun Wright-Phillips and Joe Cole. Captain John Terry was absent through injury.

During the summer tournament, Hiddink's Russia excelled, cruising through the group stages with wins against Greece and Sweden, before quarter-final victory over his native Holland.
It was that 3-1 extra-time victory that made everyone sit up and take notice of the Russians' attacking vigour, before defeat to eventual champions Spain saw them eliminated.
The Russian role is Hiddink's fourth at international level, following successful spells with Australia, where in 2006 he led the country to its first World Cup Finals since 1974, South Korea, where he guided the co-host nation to fourth place in 2002, having earlier in the tournament secured their first ever win in the tournament, and Holland, who also reached the last four of the World Cup in 1998. It was a Michael Ballack goal that spoilt Korean dreams at the semi-final stage. 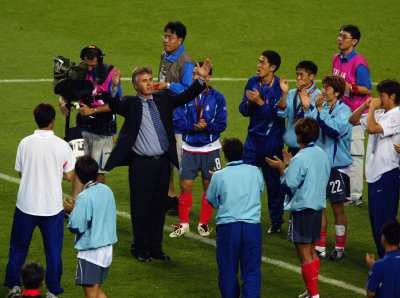 Despite this success, Hiddink's mark on the club stage is equally impressive. Upon leaving the South Korean post in 2002 (having been awarded honorary citizenship) he returned to Holland and PSV, for whom he had played during the early 1970s, and coached to a European Cup victory and a hat-trick of Eredivisie titles in the late 1980s. Included was a domestic and European treble in 1988.
His second spell at the Eindhoven club, which he combined for a time with the Australian national coach role, brought more success. Three more league championships in four years, coupled with a semi-final appearance in the Champions League, at a time when domestic Dutch football has lost some of the weight it used to enjoy, was a mighty achievement.
It was only an 89th minute goal by AC Milan that took the Italians past PSV to play Liverpool in the 2005 Final in Istanbul.
Hiddink's initial spell in Eindhoven was followed by a one-season stay in Turkey at Fenerbahçe before an association with Spanish league football that would occupy him for the greater part of the 1990s began.
Three years at Valencia, in which the club twice finished fourth, were brought to an end by the offer of the Dutch national job but when Hiddink returned to the Iberian peninsula, it was to the Bernabéu and the top job with Real Madrid.
The World Club Cup was won but the capital's famous club proved impatient when domestic results didn't immediately match that triumph and he left after just half of the 1998/99 season, moving quickly south to take charge of Real Betis.
He remained in Seville until the end of the 1999/00 season when his career path turned back towards international management and the South Korea challenge where a reputation for producing attacking, high-tempo football was further enhanced.
Speaking about the appointment, Hiddink said: '[Roman] Abramovich does so much for Russian football that I wanted to do something back.'
'There are two scenarios: it goes bad and they say "go back east" or it goes well, but I'm not thinking that far ahead.'